As promised, for those who are interested in the actual birth story, this is how the munchkin joined our family:

We had a c-section scheduled for 8 a.m. on July 22nd. My complete placenta previa never moved so, as expected, the date stuck. B and I arrived at 6 a.m. - which meant a luscious wake-up at 3:30 to get to the hospital on time - and then began our wait. 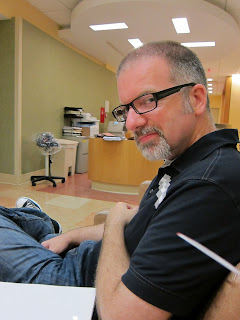 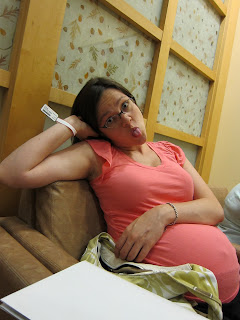 It was a very long and boring wait.
The insane record-breaking heat from that week had put a lot of ladies into labor, and our 8 a.m. start time came and went. When we finally went into triage for surgery prep, everyone seemed to bustle right in and out of our little curtained room. Our doctor wanted us in the OR without delay, to make sure we got in somewhat close to our actual slated time - they were already at the point of rescheduling women with inductions that day.

I was put in an ill-fitting hospital gown (no room for giant pregnant belly AND my tush, so there was a lot of unpleasant gaping) and hooked up to machines to monitor both my heart rate and the baby's. They did a pre-surgery BG (117, thank you diabetes gods) and measured my blood pressure over and over and over. 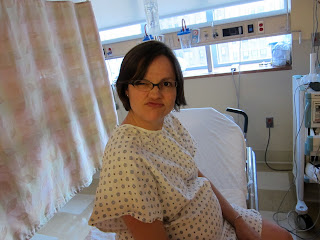 I clearly hated being in the gown. 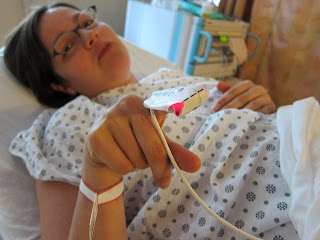 Not phoning home. Measuring heart rate!
My OB stopped by to explain how things were going to proceed, and why we'd been waiting so long. She also reiterated the placenta previa risks involved in the upcoming surgery (the bleeding, and the remote concern about a hysterectomy), as well as informing me she had 4 bags of blood on hand should she need it. Scary, yes, but she made sure to conclude that she didn't think we'd run into any worst-case-scenarios - the blood was a safety precaution, and she was confident that any bleeding that did occur could be controlled with drugs.

A whirlwind of people kept stopping by to ask questions ranging from confirming standard personal info to my experience with drugs and anesthesia. I had two IVs inserted - for drugs, fluids, and for easy access should a transfusion become necessary. Now, I hate IVs and I get REALLY worked up about them. (Hell, I'm not even really good with blood tests. One's veins should remain puncture-free as far as I'm concerned.) This time was no different. After Preteen Nurse inserted IV #1 and skipped off someplace else, I started breathing weirdly, the focus of the room went all wonky, my ears felt stuffed with cotton, and I began sweating like crazy. I spent the next five to ten minutes working really hard on not fainting. This is important info, kids. 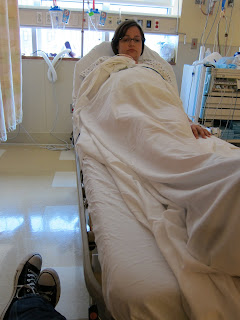 This is my "trying not to barf or faint" face - you can see the evil left-hand IV.
When we finally got the go-ahead, my medical-professional entourage grabbed me and my IV racks and slowly guided me to the OR. Ben was left behind to change into scrubs, and I was brought into the brightest, scariest room I'd ever seen - it's just like the movies.

Now, I'll spare you all the gory details of the surgery itself, but I'm happy to give the highlights I would have wanted to know ahead of time:

• If you are the kind of person who gets woozy at blood tests, TELL THE ANESTHESIOLOGIST.
Once I'd entered the OR, they sat me on the table and had me lean over and expose my back to the anesthesiologist. Kelly, the world's nicest med student, held my shoulders to balance me and make sure I stayed in the correct position, and they started injecting a numbing agent into my back so they could insert the needle into my spine. Naturally, I started right back down the swimmy, tunnel-visioned road to barfing/fainting. No sooner had I death-gripped Kelly's wrists and told him I felt lightheaded than a slew of alarms went off and people started hollering about my blood pressure and yelling to check the baby's vitals. I was unceremoniously pushed over until I was stretched out on my side, and they put some fabulous miracle drug in my IV to fix my blood pressure...which had plummeted to 50-something over waaaaay less than that. Our second attempt was much more successful, as they kept me horizontal.

• Your arms will be splayed to the sides and tied down.
It will be intense for your partner to see, but it doesn't hurt - it's a safety precaution and allows for ready access to your IVs.

• Spinal blocks actually work!
Deep down, I didn't believe there was a drug on the face of the earth that would keep a person from feeling their abdomen and uterus getting cut open, or a little baby removed from said area, but that medication is some intense stuff. I couldn't move anything - doctors and nurses had to haul my legs into position once I'd been injected - and the most I felt was the sensation of being touched. No pain, but kind of like you can feel things on your skin when your arm falls asleep. Note: Talking and laughing also felt super bizarre, as the drugs affect all your abdominal muscles which, during pregnancy, have kicked in to help you breathe around the giant fetus. Have you ever swam for a long while in water where you can't touch and it feels kind of tiring to breathe? It's a similar sensation. It's not that you can't breathe, just that it feels bizarre.

• They squeeze the baby out of you like toothpaste out of a tube.
Once the incisions are completed, they push and pull on your belly to get the baby out. Your whole body will move with the force that is exerted. Again, no pain, but it is surreal.

• I wasn't totally out of it, but the drugs made my memory a little hazy.
I remember my daughter's first cries with crystal clarity, and can perfectly recall what she looked like and how it felt when I burst into tears upon first seeing her tiny little self, but most of the surgery feels a bit like a dream sequence. Or maybe like I'd had a few too many beers.

• Just because they keep the baby with you does not mean you're out of the woods yet.
I was beside myself with joy because L was kept with me while I was stitched up and cleaned after the surgery - I thought that meant everything was perfect, and she'd be headed with us to recovery. Turns out a low blood sugar doesn't happen instantly...

• The baby of a Type 1 mom is likely to have a low blood sugar after birth.
L's was 18. They gave her a bottle of formula and she didn't come up enough, so they whisked her off to the NICU to my teary dismay. I felt like a horrible failure, like my diabetes had a victory despite all my hard work, and now my poor just-born tiny daughter was suffering because of me - brutal heel sticks and IVs and being separated from her parents, all because I was a "bad diabetic" and didn't get my numbers right. And then an endocrinologist stopped by during rounds two days later and offhandedly mentioned that, try as they might, babies of Type 1 moms almost always have a blood sugar drop after being born. I wish I had known going in that a low blood sugar could be typical, that it's the perfect blood sugar that's the anomaly. I wouldn't have had a sobbing breakdown the first night had I known it wasn't my fault that L was in the NICU.

• Your doctor will tell you how things went, but might not give you all the details.
I did end up having previa-related bleeding during surgery. My OB said she was happy with the way things turned out, as they managed all my bleeding with medication and obviously didn't end up needing a transfusion. Sounds perfect, yes? And then my night nurse on the maternity ward said I should drink lots of fluid since I'd lost a lot of blood. "Wait, what? A lot of blood? But the doctor said..." Turns out I'd lost an additional one and a half liters of blood. They'd managed the bleeding with two doses of medication and prevented need of a transfusion, but that was a helluva lot of blood I was missing and I didn't even know it.

• Getting out of bed to pee for the first time was just plain awful.
You shuffle like an ancient person and can't stand up straight. And it hurts, even with pain meds. You'll survive, but anticipate suckiness.

• Wear the mesh panties.
My nurses called them "Victoria's Other Secret," and they're beyond ugly...but they won't hurt your incision. I took a stack of them home to boot, just because I was afraid to put real underwear (well, the granny panties I bought to substitute for real underwear) on again.

• My basals were freaky-low after delivery.
Seriously. My endo had set me up with numbers that were HALF of my pre-pregnancy rates. I'd thought "You're kidding me. I'm going to be cruising at 500 with these basals!" But my numbers were amazing, and I was low only once during my four days in the hospital - and even that one low was because of a poor carb count by yours truly.

• As much as I worried, as scared as I felt, seeing, hearing, and holding that baby was something so amazing that it's impossible to describe. It eclipsed everything else.
I had been terrified of the surgery, and Big Nan had done a number on my confidence about diabetic pregnancies in general. I had been a nutcase since I'd gotten the positive pregnancy test, and I'd obsessed about numbers and fetal echocardiograms and amniotic fluid and everything else for months. (Oh, B, I'm so sorry. You're a hero, always always always.) But the minute I heard L scream, the second I saw her, I was so overwhelmed - so filled with relief and gratitude and love - that it was all forgotten and it just became about her coming into the world and joining our little family.


*       *       *
All in all, the c-section was not as awful as I had imagined it being. I'd wanted to avoid a low blood sugar for L, and we got one anyway. I'd planned on breastfeeding exclusively, but she got formula in the NICU for her first 36 hours after being born. In a nutshell, nothing worked out exactly like I'd hoped or imagined, but L is here safe and sound, and she's thriving more than four weeks later. B and I couldn't be happier. Or luckier. 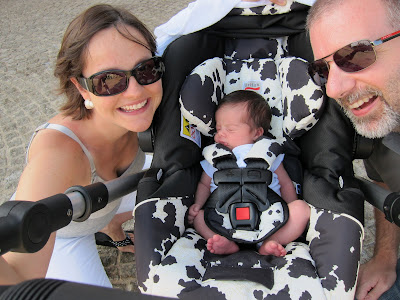