So we had our follow-up scan yesterday. The verdict? The Jeffersons would be highly disappointed in my placenta, but I don't think it's the placenta's fault.

I did not finally get a piece of the pie.
Apparently there was some sort of miscommunication at the scan in March - it turns out I have (and have always had) complete placenta previa, not partial. Not a gigantic difference in what I had to do for the past four weeks, but certainly a different prognosis. Obviously, it's less likely a placenta will move from totally covering a cervix to 2cm away from it than a placenta that's just covering a smidge of the cervix, right? It would have been nice to know the truth, if only to manage my "Maybe it'll move!!" expectations.

At any rate, this means that our OB is pretty damned positive we'll be doing a c-section. Like, so positive that - even though she was all "We'll confirm at the next scan in four weeks" - she told us we might want to consider canceling our birth class to save a few hundred bucks since "you won't need to know it" and suggested just taking a breastfeeding class instead.

We also discussed the timing of the c-section. Between the previa and the threat of bleeding that it poses AND the diabetes and the degrading placenta it can cause, Dr. D said she tends to schedule the section for weeks 36 or 37 to make sure the baby will be safe. They'll be watching me like hawks (2 scans per week after week 32!) to make sure she isn't in distress until the surgery, of course, but no one wants to hear their uterus described as some sort of ticking time bomb of doom.

She also encouraged us to find a pediatrician and make an appointment for shortly after the birth - there was some level of urgency to her suggestion, which freaked me out. Why would the baby need to be seen so soon? Is it because she'll be so early, or because of the diabetes, or...? I'll get clarification at the next visit, but yo doc. Could you keep the freaking me out to a reasonable level for one visit? 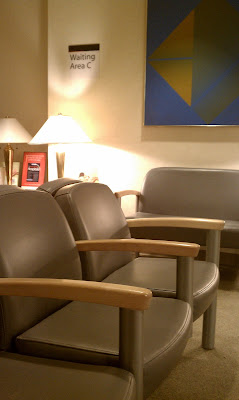 I remembered to take a picture of the waiting room!
The only happy news (and really, the thing I'm most concerned about) is that baby girl is just peachy. She's clocking in at 2lbs, 8oz - 43rd percentile for growth, so smack dab in the middle of the curve and exactly where we want her to be. I was thrilled of course, since I always have that dreaded macrosomia living in the back of my mind. She has a cute button nose, and had her leg up over her head for some acrobatic moves during the entire scan.

So. I'm still trying to wrap my head around everything. I'm disappointed about the previa, of course. It's hard to hear that you're probably going to be one of the very rare women (1 to 2 percent) who end up having the birth affected by the previa - those odds make me roll my eyes at my craptastic luck. I'm also a bit anxious about the c-section, as I've never had real surgery beyond getting my impacted wisdom teeth removed. I'm also totally weirded out that I may very well know my daughter's birthday in less than four weeks - nothing is stranger than scheduling delivering your baby like you would schedule a lunch date with a friend. And I don't even want to begin to describe the instant "OMG NOTHING IS READY!" panic state my brain jumped to when Dr. D started talking dates - all of this got real in a hurry, let me tell you. I mean, I know it's not that much difference in actual time. But my "Oh, I'm due in August!" instantly became "Oh, she'll be here in July!" and that just feels like such a big shift!

In the end, I know we'll get it all done before her arrival. (Well, at least she'll have a crib, clothes, diapers, and all the basics ready to roll.) B will do his damndest, as usual, to keep me as sane and calm as he possibly can whenever I start to freak out too badly. I have faith in my medical team keeping me and baby girl safe as houses for the c-section and all the uterine stalking leading up to it. And if you told me I had to pick between the potentially-scary-but-maybe-just-inconvenient complete placenta previa OR a totally healthy baby at the end of a type 1 diabetic pregnancy, you can bet your ass I'd choose the healthy little girl every single time.
Posted by Unknown at 10:20 AM