I mentioned all the doctor appointments that seem to be bunching up with BabyH on the way. This week was a banner one, with half of both Monday and Tuesday spent waaaaay uptown at the facility where my medical family lives. I failed to get waiting room photos each day, if you can believe it - I'm gonna plead for mercy, as my mind was just churning about the appointments themselves.

Monday wasn't too worrisome, as it was a visit with my ophthalmologist and I LOVE him - he was amazing when my first microaneurysms were found and I completely came apart in his office. Cool as a cucumber, warm and reassuring, I won the doc-lotto when I found this guy.

The point of the visit was mostly for a second trimester check-in to establish that everything was still all okay, and to plan my third trimester appointment. According to my doc, sometimes retinopathy can be completely unpredictable during pregnancy - they're not sure if it's hormones, blood pressure, fluid, or a butterfly flapping its wings in Omaha, of course, but for one reason or another it can escalate pretty quickly. As a natural worrywart, I was happy for the check-in and even happier after my dilation when I was told everything was holding steady: "You're actually down to just one dot in each eye, but I'm going to say you're the same since it wasn't a significant change."

Next up: the fetal echocardiogram. Per the American Heart Association, "some pregnant women are at increased risk of giving birth to a baby with congenital heart disease." Type 1 women fall into that category, so our OB referred us for the fetal echo. As gaping holes in a fetal heart were one of the lovely images in my head courtesy of Big Nan, the echo was a source of much angst and worry in the Hoffmanderson household the past few weeks - I'd been both dreading it and anxious for it to come so it could be over and we'd have answers.

We arrived at exactly our appointment time (curse you, A train!). The entire floor was insane - like nothing I've ever seen before. Such a high-end spa atmosphere that I felt like I should be wearing a fluffy white robe and drinking cucumber water, on the way to my massage in some private, quiet room! After the usual paperwork - which included a very informative brochure about what fetal echos actually are - we were lead to our scan room...which had a giant mounted flatscreen TV so we could watch the scan along with the doctor. A flatscreen, I kid you not - very unlike our OB's office, let me tell you.

On my end, the actual scan was basically like a typical ultrasound - the wand, the gel, the belly, the darkened room, the blobby picture of the fetus. The big difference is that the doctor occasionally used  color to see blood flow, and she also recorded the actual heartbeats. From what I could tell, she was measuring peaks and valleys in the beats and taking pictures of the heart and the brain to make sure blood was flowing where and how it needed to be - still, I'm not a doctor, and she didn't get into the nitty gritty of what she was actually doing. We just spent an hour watching her do it on the screen. A looooong hour. You'd think it would be exciting to watch your unborn baby's heart beating, but at some point it just becomes a super close-up of a grainy, moving blob on the screen that occasionally pulses red or blue. And after 20 minutes, that darkened room becomes a tempting place for a nap....

In the end, we got the same nonanswer answers we got at our anatomy scan last week. They were looking for thickened heart walls or giant holes - the typical issues for a Type 1 pregnancy - and they found none BUT I'm not far enough along yet to see everything they need to see so we have to come back in 4 to 6 weeks for another exam before we're officially cleared. To clarify, and because I needed to heart these wonderfully warm specialists say it out loud, I actually asked them "So as far as you can tell, my diabetes hasn't damaged her heart so far?!" and they said no. I still get a wave of relief when I remember their no.

So, once again, I walked away with enough of an answer to feel relieved that the very worst didn't happen. We're not totally out of the woods yet, as we have another anatomy scan in three weeks and our second fetal echo in April, but those woods are becoming decidedly less dark and scary. 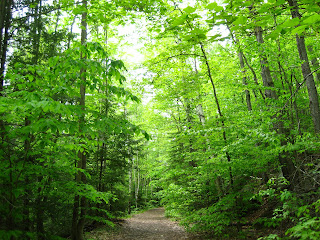 See? Totally less scary. There's a path and everything.