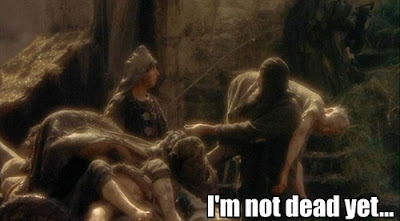 I do hope you all read the post title in an English accent....
I've been really, really quiet here, I know. Bob would say that's okay because I'm not getting paid, but I still feel like I should be posting more often. There's been a lot of non-D, non-preggo stuff going on that's keeping me busy - freelance (to save up for the bambino), feeling kind of tired all the time, jury duty, work drama, and my birthday tomorrow - but it all pales in comparison to the D and preggo drama I'm focused on right now.

We had our second anatomy scan on March 24th. (Still a girl!) With Nan's creepy book in the back of my mind, I was a bundle of nerves beforehand and spent the entire exam with one pair of fingers crossed under my head. It must have worked, because they found nothing wrong - as far as they're concerned, she's perfect, right-on-target for size, and I haven't harmed her in any way with my high-risk Type 1 status (well, that's what I took away from it). I'm not going to relax until fetal echo #2 next week, but I was relieved to hear good news...even if it's not yet all the news.

But - there's always a but, isn't there? - the other shoe I'd been waiting for did actually drop. BabyH is safe and healthy, but I have "partial placenta previa". The dictionary defines it as:

This is all the horrifying 18th-century-bloody-birth sounding stuff B and I googled in between the scan and our OB appointment to go over said scan. (Which, ugh - a vaginal ultrasound to confirm. B offered to leave the room, but I figured this preggo road is only going to get more gross and awkward, so we'd better just suck it up and get down to brass tacks. Still. Ew.)

Note to self: never, ever google a condition like that again. Why? Because it may not be as bad as MayoClinic.com makes it sound.

Apparently, I'm in the small minority of women who, at 20 weeks or so, have the placenta attached too close to the cervix for everyone's comfort. At this point, it could still move - as the uterus expands and BabyH grows, the placenta could shift up much like a scar on your forehead would "move" as you grow from a child into an adult - and then there wouldn't be any problem at all. But if it doesn't? Well, that's potential for bleeding, a definite C-section, probable bed-rest, and it means everyone's going to be extra super cautious during delivery lest we have hemorrhaging and other awful complications.

They'll check again in 7 weeks. In the meantime, in order to avoid prompting any bleeding, I'm under orders to take it easy - no strenuous exercise, no heavy lifting, no sex. It's like I'm back in Victorian times when pregnant women were seen as basically fragile and useless, and it kind of hurts my brain.

People have asked me how I feel about the whole thing, how I'm handling it. (It sounds really scary, right?) Knowing that at this point it's just a maybe-problem that could still go away has colored my response, I'm sure. But I find my overwhelming feeling is, weirdly, one of relief. I entered into this whole pregnancy fully expecting some sort of disaster to occur, but not being sure I could cope with it once it happened. How do you deal with the idea that your disease - one you've struggled with for years and years, but have pretty much accepted as your life - has caused problems for someone else? Bad enough feeling like a burden on B and all the other T3s in my life...but my unborn baby?

And yet that didn't happen. Once again, my daughter is a healthy little jellybean. I've done nothing to harm her and I have managed to tame my diabetes to the best of my ability. But me? My health? I'm used to having something wrong. I know I can deal with anything that's thrown at me - hell, diabetes itself has made me that tough person! So it's relief I feel. Relief that she's okay, relief that Nan is STILL in the wrong (suck it, Nan!), relief that I know I can be strong, that I'm able to take care of myself, that I have an incredible team of doctors working with me, and that I have B and an amazing support network.
Posted by Unknown at 4:01 PM