He arrived at noon: 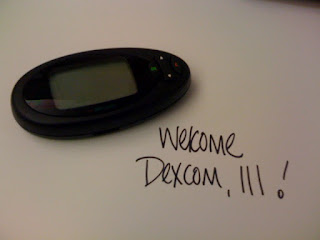 A third! Do we think this Dexcom needs a monocle or something?
I immediately plugged the him into the wall, shut my door, and put in a new sensor (in my thigh! for the first time!). For the record, kids, if you're using the Dexcom write down your transmitter number someplace. That way, when you have 3 days left on a sensor and you have to replace your receiver, you can just restart the damned thing instead of putting in a new one so you can see what your ID number is. Like I had to do.

Unlike my last go round with Dex Jr. - I'm an old pro at this now! Being on receiver #3 since February will do that to a girl - my new gear came with a new item: 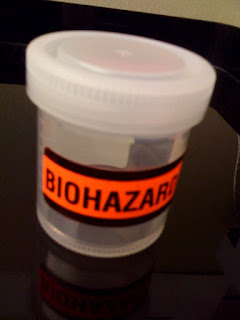 It TOTALLY looks like a pee cup.
I was confused for just a moment, and then I realized they didn't want me to send them urine. They wanted their used sensor back. (Ew.) I had to have B fish that little sucker out of the garbage at home (ew, again), but it shall be sent off to California on Monday.

Let's see if we can get more than a handful of months out of this one, hmm?
Posted by Unknown at 1:05 PM