Carb counting = not what I was expecting!

My Advanced Carb Counting class came and went on Friday. My ridiculous nerves resulted in a fun little BG pop that afternoon, but such a thing was completely unwarranted. First, I was wicked pleased with my CDE - she put on a good show and, more important, managed to be completely non-judgey or overly strict about eating habits and carb-counting skills. That's no easy feat, and it was nice to be reminded why I liked her so much in the beginning - right now, our relationship is mostly anxiety on my part (GOD, I hate this logging! Will I ever get the A1C I want? I had popcorn for dinner Thursday and was up at 187 1.5 hours later - what is she going to say?!) and almost relentless good cheer and endless number-tweaking on her part. And as much as I need the "Go team!" cheerleading, it can also be a bit maddening. Skip the "We'll get it next time!" lady - how about "No, I have NO idea why that number came up. This disease is idiotic."

I'm sure the other people in the class were also happy with her "If you don't get it right, it's not the end of the world. Just use the info for next time" attitude. I know I would have much preferred her to Evil Nan from 1993.

The first half of the class was a little more beginner than I'd expected, but I suppose any good class has to mention the basics at the outset just to make sure all participants are on the same page, right? So it was off to a bit of a slow start...and then I was met with the crushing "WHAT?! No plastic fruit?!" disappointment. I think I'd taken that "advanced" a bit too much to heart, and had expected a lot of Guess the Carbs food sitting everywhere. 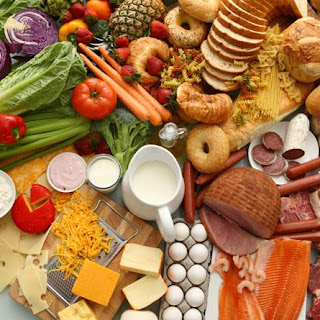 Instead, we had a PowerPoint slide show and my lovely CDE. That being said, it turns out you can pick up quite a few tidbits that way. So here are my New to Karen carb counting tidbits:
All interesting tidbits to say the least, and then she whipped out her Eating Out guide. I think I'm going to write these down on a card to keep in my wallet. You all might already do that, but I'm a little slower on the uptake!
She had other tips, too, but I could never use them. My basal is so low at this point that my cat farting in the next room causes a BG spike, so I'm way too sensitive to be able to not dose for salad (even 5 or 7 carbs from a side salad) or alcohol (which is tricky math, but ALWAYS requires an up-front bolus for me).

Albeit imperfect, it was informative and I'm glad I went. Aside from the carb info, I also got to talk to her in person about some logs, and it was good to see how she went through the numbers and why she gave the advice she did. For example, she is WAY more aggressive about lows than highs, which I found aggravating since it doesn't help my A1C when all we worry about is the lows. But she was worried about them because they screw up the data for the entire day, not just for my safety. I can get down with that.

I want to take her out to dinner now, of course, if only to see if we could have a Carb-Off - a Wild Wild West sort of scene in which we both "draw" our carb guesses and see who gets shot down. She might win (she's the professional after all) but I'm confident I'd get a shot in.
Posted by Unknown at 5:15 PM