FAIL: One Touch UltraLink, or Why my forehead vein won't stop pulsing

I've been busting my hump since last summer, working toward tighter and tighter control. I started the pump, I'm rockin' the Dexcom, I'm logging religiously, and I'm testing like nobody's business. And with all of the resulting insane, creepy focus - seriously, it's like my BGs are celebs and I'm a hard-core stalker - I've noticed that my One Touch UltraLink sucks.

I know meter accuracy has been a big issue in the DOC, as it should be. 20 percent +/- accuracy is just ridiculous, and not helpful for correct dosing or closely managing the D. But this is getting out of control. In the past month, I've seen more than 100-point discrepancies between blood sugars done mere seconds apart. My own failsafe of "Hmmm, I don't quite feel like I'm only 130" is not nearly as helpful as Dexcom's bellowing for a new BG when he doesn't think my calibration is right, but the fact is that I'm using failsafes for a piece of machinery from a company that declares "Our DoubleSure Technology automatically checks each sample twice to confirm the result."

Bullcrap. Are you telling me that the two BGs I did this morning at 1:55 - 66 and then 107, which is closer to a 40 percent variation - is the awesome result of FOUR separate failing tests? Nice job by you, Lifescan!

As I've been noticing this more and more (thanks, Dex, love you), I became convinced it must be a lemon meter. And so I called Lifescan this morning. Hoo boy. 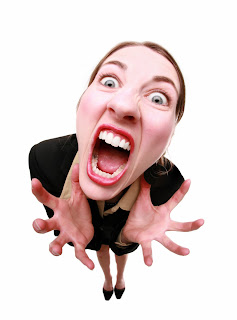 Had I tried a solution test on my strips? Yes, yes I did. It's not my strips.

Do you touch the strip when you apply blood? No. I use a bead of blood and allow it to be drawn into the strip. Like I'm supposed to.

Does your last result say "mg/dl"? Are you kidding? Do you think I've JUST noticed that all my BGs are being given in Canadian?!?

Were the strips opened more than six months ago? Is the vial cracked or broken? Uh, no? These are basically a week old. Maybe less than that.

We continued on in this "Are you screwing up the BG test procedure?" vein for quite some time, and then we reached the point where I lost it:


Have you experienced symptoms as a result of this problem? Um. Excuse me? Symptoms?
From the readings. Did you have symptoms because of the problems? I had to retest because the BG was incorrect. If I didn't retest, I would have dosed insulin or treated with juice incorrectly and then would have had symptoms.
So you didn't have symptoms. [Getting a little testy now.] I didn't have symptoms because I've been doing this for 16 years and I know that if I don't feel the same as my meter's telling me, I should retest. But I would have had symptoms if I didn't know your machine was wrong.
I understand. But you didn't have symptoms? If you want to twist it that way, no, I avoided having symptoms.
Great! It sounds like the machine is working the way it's supposed to, as there is an error of margin for results. It could be your insulin. [Officially lose it, and bark a laugh out.] That's not how insulin works! I was taking tests within seconds of each other! The error is completely on the machine!
Well, but the machine is working how it's supposed to. If the solution test gives you results within the range on the bottle of strips, the meter is working correctly. So what you're saying is that, because the solution test was right, the machine is working perfectly?
Exactly! It's just that it's working perfectly crappy, because the results are completely useless. Thanks so much for your time.

And then I hung up, spluttering in frustration and anger. I get that she's some lowly tech support person who clearly has no clue about the way this disease works. I. Don't. Care. It's on Lifescan and Minimed and all the companies who make a gajillion dollars off diabetics to get their sloppy acts together, from customer service reps (she asked if I was on a Dexcom pump! DUDE. I use the UltraLink. Ya know, the one your company makes for Medtronic?!) to their products. I couldn't turn in my work at the office and say "If this was a good day, it's only 20 percent off what you wanted. Maybe 40 or 60 percent! Who knows?" How can they?