And then there were four.

Yesterday was my MRI follow-up with my replacement orthopedist. (Sadly not nearly as cute as his site had suggested. He was cute, but more in a Steve from Sex and the City way - all goofy and seemingly shy - than in a McDreamy way. Sigh.)

The diagnosis from the radiologist's report: "minimal tendinosis of the rotator cuff with a tiny partial thickness rim tear at the distal infraspinatus insertion." In English, this means they found a tiny tear of my rotator cuff and some tendonitis. What didn't show on the MRI were the next words out of Ortho Steve's mouth: adhesive capsulitis, or "frozen shoulder syndrome."

I left the follow-up feeling a weird mix of relief (it was something, so I didn't get dismissed and now I have an action plan to make it better) and frustration (crap on a cracker, something else to deal with?!). An hour later, I'd evolved/devolved to rage and sadness - not for different reasons this time. Just two sides of the same coin.

At 2 to 3 PT sessions a week for 6 weeks, with a minimal copay of $20 a pop, I'm looking at $240 to $360 to fix something I didn't cause. I'm not out there playing extreme badminton or waving in a pageant for 20 hours a day - I work a desk job, I'm cautious about my physical health, I work really hard at keeping this rusty-old-jalopy body of mine in the best condition it can possibly be. 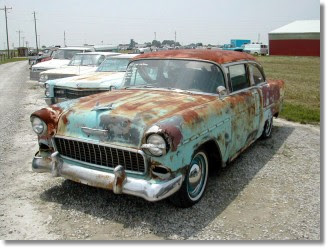 After I'd seethed for a bit, all I could think about was that jalopy. How sad to have a jalopy! Sometimes I feel like the little Dutch boy plugging leaks - I've only got so many fingers, my arms reach only so far, and I worry that I won't be able to handle the next one. The D is the big leak, certainly, but I've also got the Hashimoto's, the mild retinopathy, and now the shoulder. I realize this all sounds so very defeatist, so woe-is-me, and I hate when that bubbles up to the surface. But I find it incredibly hard to keep my chin up when I keep getting whacked on my head.

Allison Blass had an excellent post today, and the following really resonated:

I spend every waking moment of every day trying to be normal, and the second I accomplish that it is taken away by the next thing that I do.

Normal, for me, is getting the jalopy to run (with duct tape and a few MacGuyver moves) like the nice sedan most people have. And that illusion of normal is shattered on a routine basis. Big things do it, like a new diagnosis or wrangling insurance, and little things too, like a CGM alarm going off in a meeting or a low messing up your sleep - the source doesn't matter. It's all about the shattering. Normal's a hard thing to achieve when the odds are stacked against you, and my body - all the blood, bones, and genes within - constantly reminds me that the odds are just that.

I don't expect this all to be rigidly under my thumb - I know it's beyond my control. Sometimes I just wish my attempts to influence it felt more effective.
Posted by Unknown at 11:28 AM

Email ThisBlogThis!Share to TwitterShare to FacebookShare to Pinterest
Labels: diabetes, DOC, On my mind, rant, T1