Last night's ACT1 group meeting (and beyooooond!) was incredible. The meeting itself was the kickoff to the ACT1 spring speaker series and featured Alenka Ravnik, a nutritionist at Mount Sinai. I gotta say - like most T1s, I've done the nutritionist thing and I've always left the building congratulating myself on not stabbing the skinny little twerp who tsk-tsk-tsked my eating habits and then offered ridiculous suggestions to revolutionize my life:

Twerp: And then, for a free snack, you may have four pumpkin seeds!

Twerp: Or a pickle!

As I'm struggling a bit with my new meatless ways (and the new TDD of insulin I'm on because of it), I thought I'd suck it up and give it another shot - at the very least, I figured it would lay some groundwork for my CDE appointment on Monday. I was more than pleasantly surprised by the evening.

Alenka - in a fabulously trilling accent - offered a lot of great advice for a room full of women who all had different goals, different questions, different backgrounds...and all have the eating issues (carb counting, MEF status, carb backlash, alcohol bolusing, etc.) that all we T1s deal with on a daily basis. No small feat! Some of my takeaway tips:

Vitamin D: Studies have shown that vitamin D deficiency and T1s are well acquainted. The cheapest, easiest way to ensure you get enough vitamin D without overdosing through pills (it's a liposoluble, just like A, E, and K)? 15 minutes of sunshine, three times a week, on your face, hands and neck. Other sources include fortified milk and shiitake mushrooms (rich in the vitamin as they absorb UV rays while they grow - bonus points to Dana, the star pupil and source of much hilarity that evening).

Omega-3s: Wonder nutrient! Obviously found in a bunch of animal sources, but for folks like me we can find them in walnuts, flaxseeds (which should be refrigerated, lest they become rancide, and always be ground before consumption), chia seeds, and algaes (seaweed and the fun green stuff found in miso soup).

Yogurt: Wonder food! Especially plain Greek yogurt, which still has the awesome good bacteria but has less carbs and twice the protein of regular yogurt. Plus, it's processed in the town-next-door to Gloversville - upstate represent! (right, CALpumper?) I think the catch-phrase we learned sums it all up beautifully: "A yogurt a day keeps the yeast away." 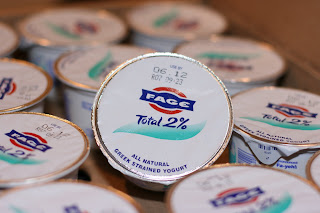 Fresh vs Frozen: Per Alenka, frozen is better! (I was surprised, too.) Once produce is picked it starts to lose all the good stuff that's in it. When an apple is shipped from New Zealand or wherever, it takes some time to hit your shelf - you can't be sure how long it took from picking to your tastebuds. Frozen produce, however, gets picked and then processed on location - it's had less time for all the good stuff to shake out. I don't know about apples (I'll stick to my Empires from slightly north of us!), but I'll be buying frozen veggies whenever I can't get to the greenmarkets of NYC.

The hour and a half flew by, and we didn't really have the chance to discuss all the pressing stuff (like drinking!) we wanted to talk about. A good sign for a speaker series, although a bit of a bummer since I was learning a lot - I'll keep notes from my session with my CDE, and hope to have a lot more food for thought (ba dum ching!) after that appointment.

The beyoooooond was as good as the group meeting itself - I got to hang with @amblass for real this time! - lots of chatter, lots of laughing, lots of good food. Most important, though, was the fact that we discussed the Old Spice man commercial at length: