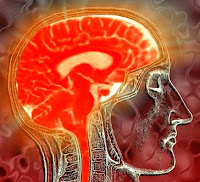 There's a new theory of brain development bouncing around out there in the world - one that is supposed to be the biggest new thing since Freud and his cigar. Two scientists (who don't actually study behavior genetics, natch) have joined together to explain how Mom and Dad's genes might play a role in mental disorders:

Their idea is, in broad outline, straightforward. Dr. Crespi and Dr. Badcock propose that an evolutionary tug of war between genes from the father’s sperm and the mother’s egg can, in effect, tip brain development in one of two ways. A strong bias toward the father pushes a developing brain along the autistic spectrum, toward a fascination with objects, patterns, mechanical systems, at the expense of social development. A bias toward the mother moves the growing brain along what the researchers call the psychotic spectrum, toward hypersensitivity to mood, their own and others’. This, according to the theory, increases a child’s risk of developing schizophrenia later on, as well as mood problems like bipolar disorder and depression.

Venus and Mars, writ large?
Posted by Unknown at 5:12 AM